Taking your first steps toward a new paradigm in build processes 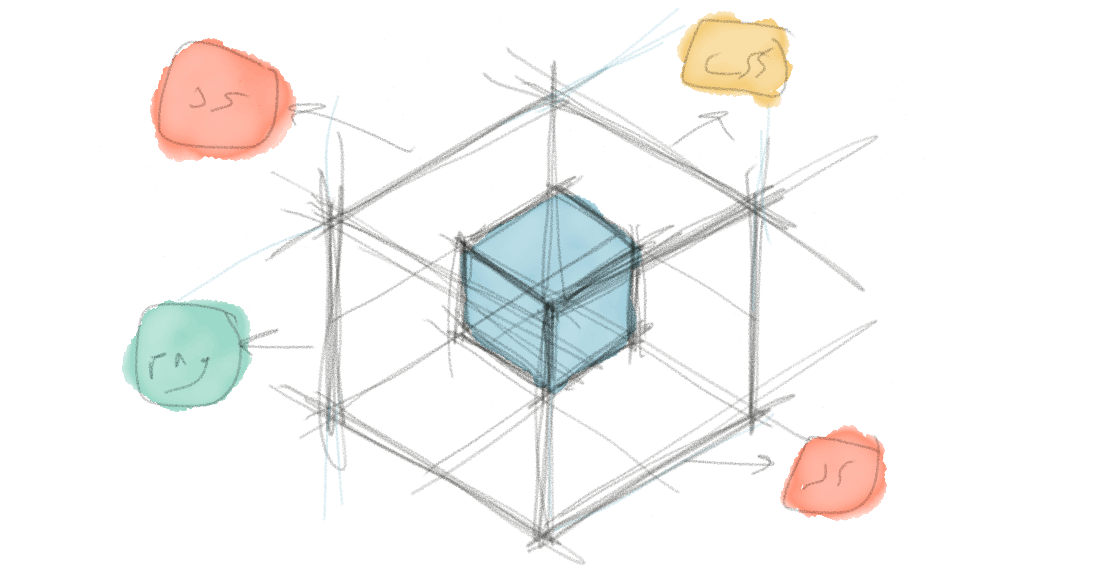 You might have heard some of the buzz around Webpack in the last few months. If you’re anything like me, you probably took one look at it, decided not to bother with its hipster black magic, and went back to using Grunt or Gulp for all of your front-end tasks. This is especially true if you’ve been in the web development game long enough to remember the days when you’d have to download zip files and manually put them in a /scripts directory — tools like NPM have made it far easier to manage your dependencies, and it’s easy to think that the tried-and-true tools are “good enough."

However, even if you have a sane build process that concatenates all of your files in production, you probably still have an index.html file somewhere in your application that looks something like this: 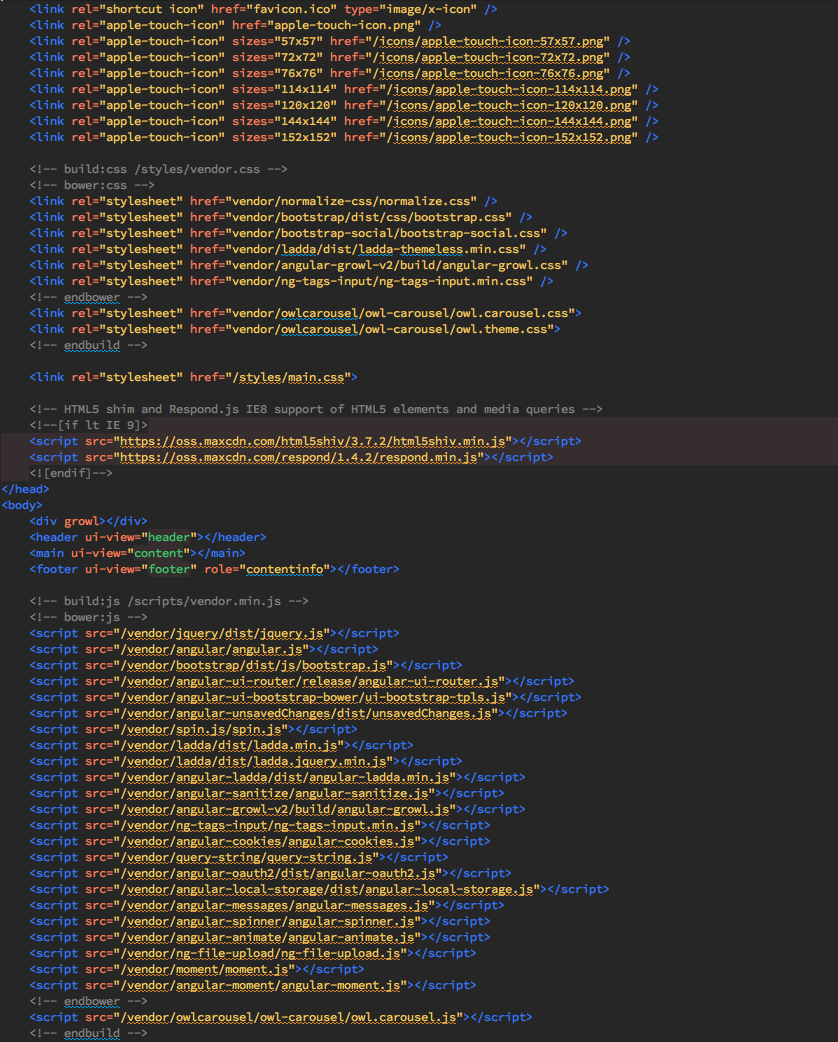 There are several problems with this approach (and if you’ve built a single-page application of any complexity, you’ve probably run into issues with them):

How Webpack is different

Webpack is a module bundler — a build tool, not a task runner. Instead of following a list of tasks like Grunt or Gulp, Webpack analyzes your dependencies tree and bundles your assets (JavaScript files, CSS, Sass, HTML, etc.) into a smaller subset of files. 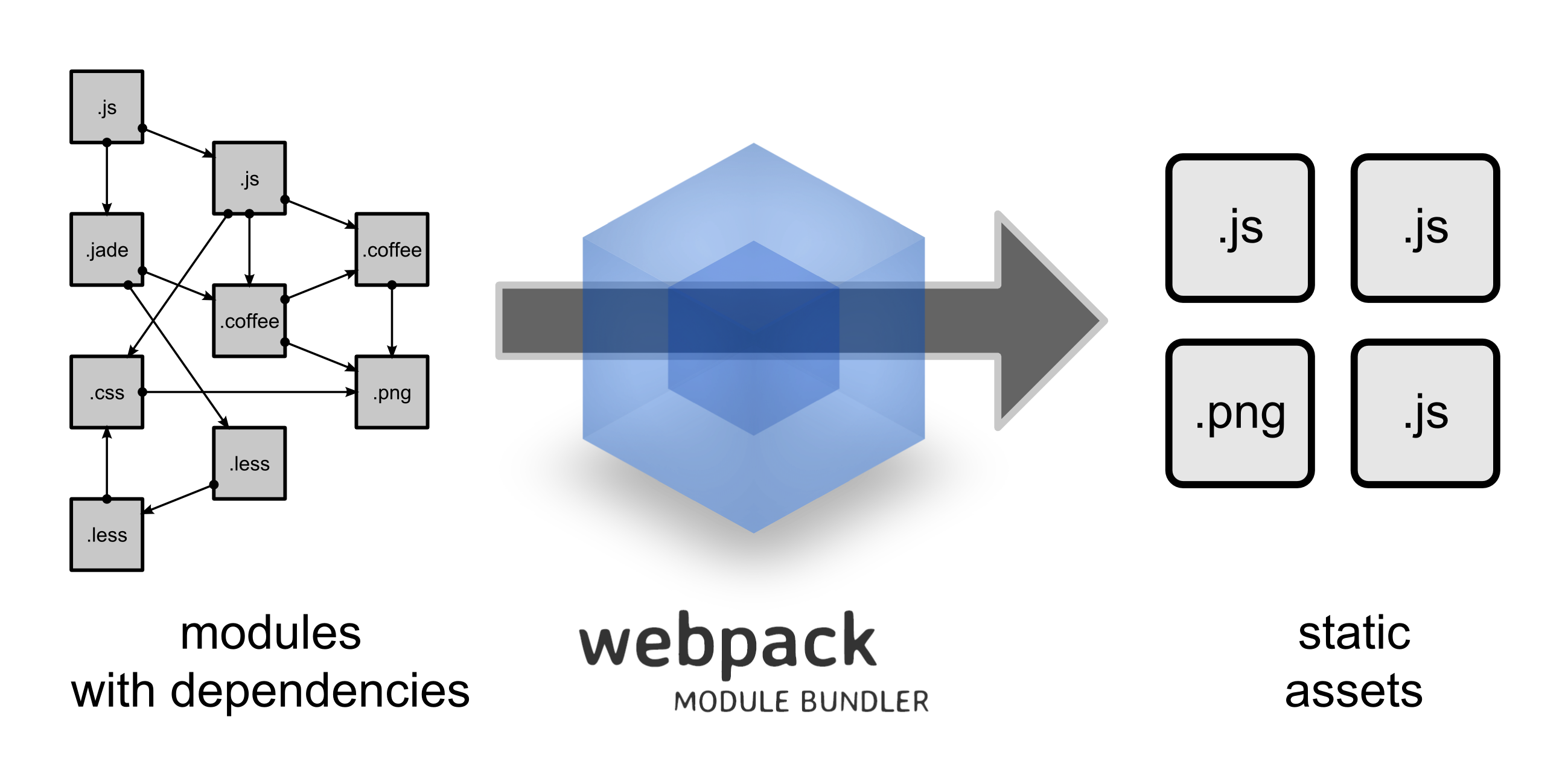 “Wait,” you’re probably saying. “This sounds a lot like what Gulp already does for me."

The difference is that, with Gulp, you’re bundling all of your assets into a few files — perhaps vendor.js, app.js, app.css — and then including them on every page, whether those assets are needed or not. Webpack, on the other hand, is smart enough to keep track of dependency trees for you and serve only those assets to the parts of your application that need them.

It does this by walking through the require statements of your project (for CommonJS and AMD) or import statements (for ES6 modules with a transpiler such as Babel), splitting the code into self-contained chunks, and then serving them on demand.

In short, if you have multiple pages in your single-page application, you can set Webpack up to only download code for each individual page. There is no need to re-download common modules.

If you’ve used a task runner before, you may be familiar with LiveReload — it listens for changes to your files and then tells the browser to reload itself when a change happens.

Webpack’s Hot Module Replacement (HMR) feature takes this a step further. Webpack will also watch for changes to your files, but instead of refreshing the browser to apply changes, it swaps out only the changed modules and updates your code in-place.

Why exactly is this so cool? If you were doing something requiring the UI to be in a certain state — such as filling out a form or looking at a dropdown menu — you will not have to waste time putting the UI back into that state after a full browser refresh.

Webpack (along with its rich plugins library) makes it relatively easy to do some other neat things as well:

Let’s put together a simple application to demonstrate how Webpack works. To follow along, make sure you're running a relatively new version of Node - 0.12 at minimum, but I recommend you get the latest (5.5.0 at the time of this post.)

This app's functionality is incredibly simple — all it does is takes a JavaScript object containing a list of party guests and then displays only their names on a page. Instead of writing HTML to display the names, we will write vanilla JavaScript to insert them directly into the DOM, similar to what we might do in a framework like React or Vue.js.

First, we'll take a look at how we would build something like this without Webpack.

Let's create a folder to hold our code and a default package.json file:

And then we'll create our three JavaScript files within a src directory:

guestList.js is a simple JavaScript object containing the name, phone number, and email of our three party guests. In a larger application, a list like this would likely be served from an API, but we'll hard-code the JSON here:

showGuestNames.js takes that list of guests, removes potentially sensitive info, and inserts their names directly into the DOM:

And index.js contains an immediately-invoked function that calls the GuestNames() function from showGuestNames.js, inserting the guest names into the DOM:

For fun, let's add a style.css file into the mix as well. 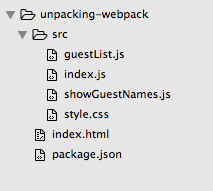 You should then see something like this in the browser:

Simple enough, right? A lot of newer libraries work like just this by inserting HTML into your JS instead of the other way around (albeit in a much cleaner and more powerful way, of course.)

Now let's look at how we would bundle these files using Webpack.

Next, we will need to add a webpack.config.js file at the root of our project:

entry tells Webpack where the top of your dependency tree is -- it will start at index.js and work its way through all your dependency files to build your output, specified here as bundle.js in the dist directory. To see how this works, run $ node_modules/.bin/webpack in your console. You should see output that looks something like this:

You should also see bundle.js in a newly-created dist directory. Let's go ahead and replace the references to our Javascript /src files with our new bundle.js:

When you refresh the page in the browser, though, our list of guests is gone! If you look at Webpack's output, you can see that it only processed our index.js file, and the last few lines of bundle.js confirm this:

So how do we get our showGuestNames.js and guestList.js files included in the bundle so our names show up again? We need to use a JavaScript module format such as CommonJS, AMD, or ES6.

While ES6 isn't 100% natively supported yet by Webpack or any of the major browsers, Webpack makes transpiling it back down to ES5 fairly easy with a tool called Babel. However, to keep things simple, we're going to use CommonJS in this example.

If you're not familiar with CommonJS, it allows you to add an exports property to plain JavaScript objects (known as modules). This allows you to require this object within other JavaScript files and, in turn, lets tools like Webpack know that they should be bundled together.

But written as a CommonJS-style module, it would look like this:

This would allow our showGuestNames.js to require this file, import it as a variable, and use it with very little change to the code:

And then we can require our showGuestNames.js file in index.js:

Let's do one more small tweak. Running node_modules/.bin/webpack is a bit unwieldy, but we can easily add a script to our package.json file to make it easier:

Now, if we run npm run build, we should see that Webpack is now picking up our extra files and bundling them together:

And if we view our code in the browser, we can see our list of names once again.

In order to fully understand the power of Webpack, you need to understand the concept of 'loaders.' They function much the same way as Grunt or Gulp tasks — you can use them to do things such as transpile CoffeeScript or ES6 down to JavaScript that browsers actually understand, inline images as URLs, or require / import CSS directly into your JavaScript files.

We're going to use the last thing on that list as an example and pull the style.css file we created earlier into our bundle.js.

"But wait," you might be saying. "Why would I want to do something disgusting like pull my CSS into my JavaScript files? Don't I want to separate my concerns?"

That's the beauty of writing modular views in JavaScript. Because you're managing dependencies on a per-component basis, you're only pulling in what you need instead of managing some sort of main app.scss manifest that lists every file you've created. If you're already using a methodology like BEM, SMACSS, or SUIT, this is a logical next step (and if you haven't heard of any of the style approaches I just listed, I highly recommend you look into them!)

Ultimately, you are separating your concerns. Instead of keeing your HTML, CSS, and JavaScript as separate as possible, the goal is to break your app into small, modular components and keep those as separate as possible. It's a different way of writing code, but it can definitely make large applications easier to manage.

Pulling in our CSS is as easy as installing the loaders from NPM:

And adding a few lines to our Webpack config file:

All loaders require at least two properties. The first is test, which specifies a Regex that tells Webpack what sort of file to look for. Here, we are looking for CSS, but seeing something like test: /\.scss$/ for Sass or test: /\.(js|jsx)$/ for JavaScript is common as well. The second required property is loader, which is just a string of loaders (usually pulled in as NPM packages) separated by !.

You can also add an exclude property to your loader object, which will tell the Regex to ignore certain files -- such as anything contained within your node_modules folder.

We'll also want to reference our CSS file in our showGuestNames.js file so that Webpack knows to pull it in as a dependency:

If we run npm run build and remove the reference to our stylesheet from our index.html file, our list should have the red color applied to it once again.

Task runners like Gulp and Grunt can still have their place in a developer's toolbelt, and for some projects, the overhead of a complex Webpack setup might not be worth the payoff when tools like Elixir make Gulp configuration a snap. However, even though there can be a bit of a learning curve on more involved setups, the power and flexibility can absolutely be worth the time investment, especially if you're using a newer framework like React.