How I (Mostly) Overcame My Fear of Public Speaking 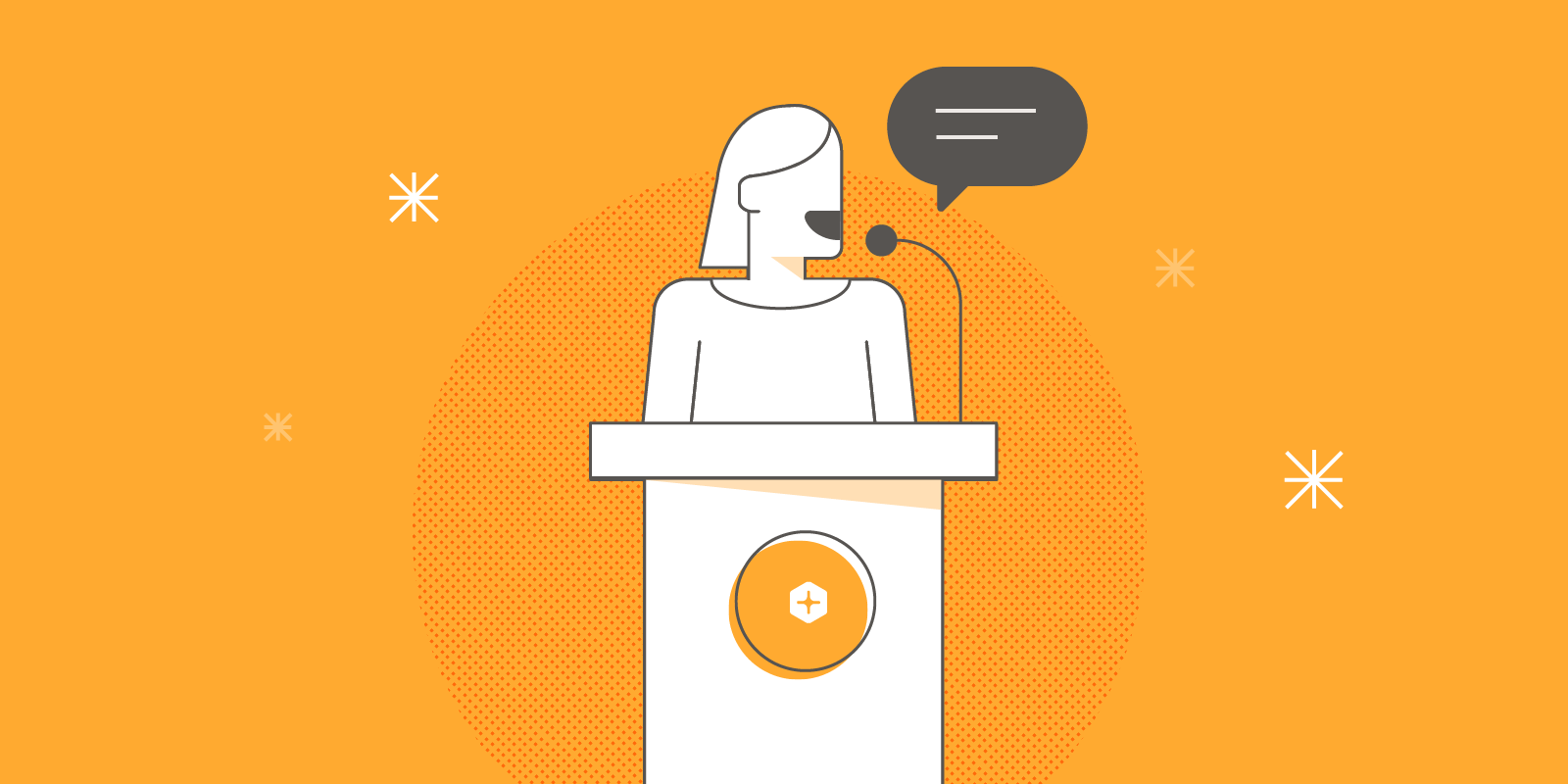 At the end of last year, I set a goal for myself to speak at a handful of conferences in 2018. At the time, it had been almost two years since my last speaking engagement, and I knew that sharing some of the knowledge I’d gained was the best way to push myself professionally.

Why had it been so long since the last time I’d been onstage? I was terrified of public speaking.

Even after previously giving several successful talks — a process that does get a little easier every time you do it — I was still overwhelmed with anxiety whenever I thought about doing another one. Few things compare to the pride and exhilaration you feel when you finish your talk and walk offstage to the sound of hundreds of people applauding, but that said, few things also compare to the terror you sometimes feel when you stand in front of a sea of laptops glowing at you in the darkness, knowing you’re the center of attention and everything you say and do will be judged.

As 2018 draws to a close, I’m pleased to say I did meet my goal: I gave three different conference talks this year. One was even a live coding talk! And I managed to do it with far less anxiety than I anticipated due a few different realizations:

You don’t have to be an expert

Many people who are interested in speaking at conferences but have never done so cite a similar reason — “I don’t know enough!” There is a common belief that, in order to deserve to get onstage and teach people about something, you need to know more about it than everyone else.

When I decided to give my Laracon talk on front-end testing with Jest and Vue, it felt like a massive gamble. While I have used Vue before, most of my JavaScript experience in the last few years has been with React. I knew all too well that the majority of the audience at a Laravel conference would be Vue developers, so teaching Jest via React would undoubtedly cause them all to spend my entire talk scrolling through their Twitter feeds. I felt like a fraud whenever I thought about going on the stage and teaching them anything about Vue — even knowing how many people in the Laravel community, React and Vue devs alike, are unfamiliar with front-end testing. Why should anyone watching listen to me when I might know far less about Vue than they do?

What helped me immensely was to reframe the way I viewed myself as a speaker. Giving a conference talk in this industry is incredibly difficult when you believe that you have to know a framework inside and out. Many programmers are brilliant people, and if you tell yourself that you have to be more knowledgable than them in order to teach them about things, you’re setting yourself up for failure.

But when you’re speaking at a conference, it's important to remember you’re not your audience's professor. There is no pressure to teach the people watching you well enough that that they can put the information into practice immediately or pass a test; you’re just a person excited enough about some topic to want to pass information about it along to people who may also be interested. They don’t have to walk away from your talk proficient in the subject; your job is to impart some tips and/or tell them enough that they can decide if they want to learn more on their own time.

Some people in your audience are going to know more about your topic than you. That’s okay. They’re not the ones who took the time to figure out the best way to present that information, to put together a slide deck, to spend hours practicing. And most likely, no matter how well they know a subject, you still know a thing or two they don’t.

It’s a conversation, not a performance

If you don’t view yourself as needing to be the be-all-end-all expert on a subject, but instead just a smart person telling other smart people about some information you gathered on something you find cool, it’s easier to view conference talks as a conversation.

“Expert” is often an uncomfortable role for an inexperienced speaker. You feel the need to hide behind a facade with several layers of polish; mistakes, therefore, feel like they would be a threat to your credibility. If you screw up any part of your carefully-rehearsed talk, why should anyone take any of it seriously?

But if you’re just a smart person sharing information with other smart people about something that excites you, the entire thing feels more like a conversation between friends. When you’re enthusing to your coworkers about an awesome new tool you discovered, you aren’t worried you’re going to somehow going to screw it up and lose all of your credibility! You’re just excited to share.

A conference talk obviously requires far more preparation than that, but a similar mindset can be helpful at calming imposter syndrome and nerves. If you approach your talk with that level of humility, you don’t have to posture onstage like you’re a world-renowned expert in a subject; you’re just a fellow developer trying to show everyone something in an entertaining and educational way.

You don’t have to take questions

One of the most anxiety-inducing parts of giving a talk is audience questions at the end. Even if you have your talk itself down cold, there’s nothing to stop someone in the audience from throwing a difficult question at you (or, even worse, not a question at all but a statement about why you’re wrong.)

That is why I, Samantha Geitz, am hereby giving you permission to end your talk and walk offstage without giving your audience the chance to ask you questions. If you are feeling up for the challenge, great! Audience Q&A can sometimes be a great way to eke out more information about a subject, and it’s likely that if one person has a question about something, other people will as well.

It also puts you directly at risk for having to say “I don’t know” in front of hundreds of people. Even though there is nothing at all wrong with saying “I don’t know,” the threat of looking like an idiot in front of everyone is enough to put most people off of giving talks altogether.

Presenting at a conference is hard enough, especially for people with anxiety and/or a fear of public speaking, and you do not owe the audience a Q&A session. If they want to ask you questions, they can find you at the conference after your talk is over or ask you on Twitter, and you can take your time to get them a well-researched answer without the pressure of being the center of attention.

Everyone is rooting for you

At the end of the day, the most important thing to remember is that nobody in the audience wants you to fail. Everyone is hoping that your talk will be entertaining and that they’ll walk away knowing more than they did before they started listening. If you do end up making any mistakes at all, it’s unlikely the people watching will realize you screwed up unless you directly point it out. It’s also unlikely they’ll hold any mistakes they do notice against you. You are always going to be your own harshest critic.

And if they didn’t find your talk useful? The vast majority people will forget about you immediately and go about their day; there are other talks they’re excited for, colleagues they’re looking forward to seeing, kids at home they miss. It’s exceedingly rare to see anyone badmouth a speaker on Twitter; everyone knows all too well how hard it is to get up on that stage, and it takes a special kind of jerk to publicly put someone down over a talk they gave. Those jerks are not worth your time or mental energy — and it’s unlikely they’ll set their crosshairs on you either way.

Did these tips completely cure my fear of public speaking? Definitely not. I still have a a lot of anxiety leading up to every talk, and the 15 or 20 minutes before I walk onstage are always a rush of adrenaline as I do last-minute preparations and try not to think about all of the things that could go wrong.

But reframing how I looked at the entire experience — and how I viewed myself as a speaker — took almost all the edge off of that fear. Getting up in front of dozens or hundreds of strangers and trying to convince them all I’m an expert on something is hard. Chatting with friends (in what is hopefully an entertaining way) about something I think is super cool for 30-45 minutes is far, far easier.

Giving a talk, no matter how large the audience, is an amazing and empowering thing. Doing a deep dive into a subject you’re passionate about in order to share information with your peers is something every developer should experience at least once.

Do you have any other tips for navigating public speaking anxiety? Let us know on Twitter!